The Tarot deck is made up of 78 Tarot cards, each with its own unique Tarot card meaning. The Major Arcana consists of 22 cards that reflect key archetypes or spiritual lessons in our lives. The Minor Arcana consists for four suits—Cups, Pentacles, Swords, and Wands. They are commonly used to measure potential outcomes and evaluate influences surrounding a person, an event, or both.

“There’s a lot of friction between tarot historians and card readers about the origins and purpose of tarot cards.” Back to the 14th Century, using cards for playful divination, the card game was similar to modern-day bridge. 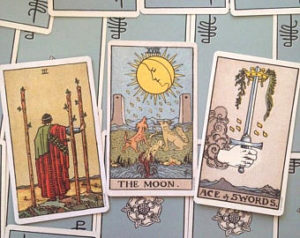 By the 1500s, the Italian aristocracy was enjoying a game known as “tarocchi appropriati,” in which players were dealt random cards and used thematic associations with these cards to write poetic verses about one another—somewhat like the popular childhood game “MASH.” These predictive cards were referred to as “sortes,” meaning destinies or lots.

Graphic designer and artist Bill Wolf, has his own theories about the tarot’s beginning. Wolf, who doesn’t use cards for divination, believes that originally, “the meaning of the imagery was parallel to the mechanics of the play of the game. The random draw of the cards created a new, unique narrative each and every time the game was played, and the decisions players made influenced the unfolding of that narrative.” Imagine a choose-your-own-adventure style card game.

“The imagery was designed to reflect important aspects of the real world that the players lived in, and the prominent Christian symbolism in the cards is an obvious reflection of the Christian world in which they lived.” As divinatory usage became more popular, illustrations evolved to reflect a specific designer’s intention. “The subjects took on more and more esoteric meaning.”

Even if you aren’t familiar with tarot-card reading, you’ve likely seen one of the common decks, like the famous Rider-Waite, which has been continually printed since 1909. “The Rider-Waite deck was designed for divination and included a book written by Waite in which he explained much of the esoteric meaning behind the imagery,” says Wolf.  These cards are illustrated meaning that illustrator incorporated the number of suit signs into little scenes, and when taken together, they tell a story in pictures. This strong narrative element gives readers something to latch onto, in that it is relatively intuitive to look at a combination of cards and derive your own story from them.

Most card readers recognize that the associations and preconceptions of the person being read for are just as important as the actual drawings on the cards: Divination cards offer a way to project certain ideas, whether subconscious or not, and to toy with potential outcomes for important decisions. Thus, like scenes from a picture book, the best illustrations typically offer clear visions of their subjects with an open-ended quality, as though the action is unfolding before you.
(excerpts from The Collectors Weekly)

What is an Angel Card reading? and how does it work?

Angel Cards are a powerful tool for those seeking guidance in their life. Like Tarot cards, Angel Cards can give insight into relationships, careers, and finances while giving the recipient peace of mind and confidence in their decisions. The messages are from your Angels or Spirit guides. 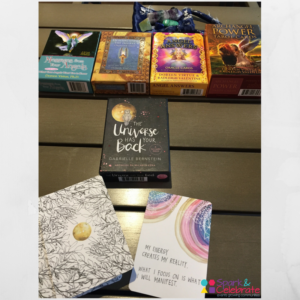 We are all energy! I have you hold the card deck while thinking of the question to ask your Angels or Spirit guides and they navigate you as to which card(s) to choose during the reading via energy.

Each card deck is different and has different Angels. Some decks are specific to one Angel. An Archangel is the chief messenger or a higher messenger, who is above the Angel. Angels are known to be messengers that connect mankind to heaven.

There are thousands of Angels and depending on how you believe, you may resonate with only a few. Angels are energy forms — just like Mythology — we humans like to create them to look like a human.

You may be wondering, is this New Age? Is this religious?

I believe it’s both. Your Angels connect you with the Divine energy of God co-creating your life. Over the years, we have created a division between the energy community and the organized religion community. In essence creating a division between our relationship with us and God. An Angel Card Intuitive reading is your Spirit guides directly sharing messages with you.